When a Dockerfile is just good enough

As you might know, one of my Open Source babies is the one and only fabric8io/docker-maven-plugin (d-m-p). If you already use this Maven plugin, you know, that it is super powerful and flexible to configure. This flexibility comes at a price so that the configuration can become quite complicated. Now, if you only want to build Docker images with Maven, I have good news: Since 0.25.1 d-m-p supports a zero XML configuration mode, the so-called Simple Dockerfile Build mode.

The idea of this mode started with a Twitter discussion: 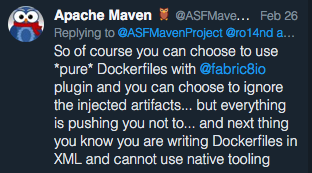 And actually, it’s true: If all that you want is to build a single Docker image from a Dockerfile, then the initial configuration is indeed too complex.

d-m-p already supports plain Dockerfiles for quite some time, and that even for multiple images. However, you still have to reference those Dockerfiles in the XML configuration of the plugin.

Since 0.25.1 you can now use the so-called Simple Dockerfile Build mode (kudos go to Rohan Kumar for the initial implementation). All you have to do is to add d-m-p to your pom.xml and add a Dockerfile. The smallest possible Maven project for creating a Docker image consists of this pom.xml

and a Dockerfile alongside this pom:

This image does not really much. With mvn docker:build you can build it, with docker run fabric8/smallest you can test it. Or use mvn docker:run so that you even don’t have to provide the image name.

where we define jar as build arg in the Dockerfile but also as property in the pom.xml:

You can use Maven properties in the Dockerfile which get automatically replaced by docker:build when creating the image. But you can use that Dockerfile also without Maven with docker build . You can’t use Maven properties with . directly as dots are not allowed in Docker build args, therefore we use an extra property. However, a maven-less usage probably does not make much sense when you don’t also build the artefacts. The full example can be found in the dmp GitHub repo.

If you can forgo Docker build args you can use predefined Maven properties directly:

The image name is auto-generated, but you can set this name also by yourself by setting the property docker.name (and you can use placeholders within this name)

You can even start the container with mvn docker:run although without any additional configuration (e.g. like port mappings). Also, you can docker:push the image.

You can still configure certain aspects like authentication or bind d-m-p goals to default lifecycle phases. Using this mode is very similar to the functionality offered by spotify/dockerfile-maven.

If you need more horsepower, you can gradually expand on this simple setup. Features which are waiting to be discovered are:

If you are interested in more to find out, then please have a look at the reference manual.

I’m curious what you think about this new mode. Please use the comments below if you want to leave some feedback. In fact, there are concrete plans for d-m-p to include the generators from the fabric8-maven-plugin functionality of autodetecting the tech stacks used for creating opinionated Docker images.